HIT ME WITH YOUR BEST SHOT: The Parent Trap 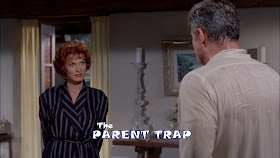 For this week's edition of Hit me with your best shot, we took a dive into the Disney vault to watch one of their 1960s classics - "The Parent Trap". Nowadays, most people are perhaps more familiar with Lindsay Lohan's delightful 1998 version. But that film certainly owes a lot to this one, with much of the original dialogue being retained.

While watching this one for the first time, I must admit that I spent much of the first half wishing I were watching the more entertaining remake instead. Hayley Mills is adorable, but Lohan did a much better job delineating the differences between the twins. As for the adults, they were allowed to bring a stronger sensuality to their roles.

The film improves greatly in the second half however and unsurprisingly, there was one adult actor who did manage to bring some sexual tension - the iconic beauty Maureen O'Hara. As such, she became the focus of my Best Shot pick.