As we venture into the heart – and heat – of summer, the upcoming awards season may not be the most prominent thing on our minds. But with the recent conclusion of the influential Cannes Film Festival, the cards are already being put in place for one category in particular – Best Foreign Language Film. With an early October submission deadline, countries will be faced with tough decisions over the next few months. And in many cases, festival awards can prove to be the deciding factor.

This piece will therefore highlight some of the hot titles from the four major stops on the 2016 festival circuit so far (Sundance, Berlin, Tribeca and Cannes), all of which have premiered country submissions and nominees in recent years.

HIT ME WITH YOUR BEST SHOT: The Bitter Tears of Petra von Kant 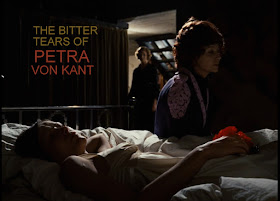 This week on Hit me with your best shot, we took a foray into the New German Cinema movement, which lasted roughly from 1962 to 1982. This renaissance in German cinema propelled several talented filmmakers into international acclaim, including Rainer Werner Fassbinder, the director of this week's chosen film - "The Bitter Tears of Petra von Kant". Starring Margit Carstensen in a juicy role as the titular character, it's a rather talky film about a fashion designer lamenting her failed relationships.

And indeed, within the course of the film we witness her endure yet another failed relationship as a young beauty named Karin Thimm (played by the incomparable Hanna Schygulla) enters her life and absolutely upends it. By the end of the film, Petra is a broken shell of her former self. And this gin-soaked climax contains my pick for Best Shot, emphasizing Fassbinder's strong skill in staging characters within a frame.

In the shot below, we effectively see all the film's characters - if you include the doll who represents Karin - towering over a subdued Petra. Not only does it showcase the all-female cast, but it also includes the sight of the "Midas and Bacchus" painting, providing the setting's only male imagery (and perhaps even a reminder of Petra's other failed relationships). It's such an effective and revealing scene about the all-consuming power of desire, thanks in no small part to Michael Ballhaus' cinematography. 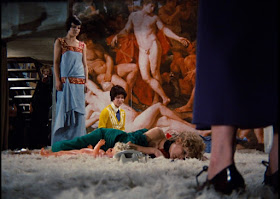 Avishai Sivan’s "Tikkun" – winner of several festival awards last year – opens with a slaughter. Not a vindictive homicide however, but the traditional practice of kosher slaughter of meat, accompanied by prayer. As customary of Hasidic Jews, this is just one of the many religious observances we’ll witness being carried out by the film’s two pious main characters – Haim-Aaron and his father. Indeed, their lives are consumed by such rituals, but their faith will be put to the test when a near-death experience disturbs their worldview in this solemn, uncompromising drama. Everyone loves a comeback. Indeed, our obsession with seeing actors reinvent themselves has lead to the coining of portmanteaus like the McConaissance (for Matthew McConaughey) and the Reesurgence (for Reese Witherspoon). From the looks of Ryan Gosling's recent work, we may need to come up with another such term, as the actor has returned from a brief hiatus seemingly reinvigorated. Following from his brilliant turn in "The Big Short", the popular heartthrob shines in another comedic role in Shane Black's entertaining crime caper "The Nice Guys".

What follows is a hilarious romp through the city, as March and Healy - as well as March's streetsmart daughter Holly - embark on a wild misadventure. Despite the noir premise, Black keeps the tone light, often favoring dumb luck over shrewd crime-solving. And the comedy benefits from the shenanigans of an impressive ensemble, notably reuniting Crowe and Kim Basinger (who plays a high ranking government official) for a mini "L.A. Confidential" reunion.

To be honest though, the obvious linkage does the film no favours, as it lacks the distinctive style and atmosphere that made that 90s classic so great. And although it shares a similar tone, time setting and counterculture vs "The Man" theme, it doesn't hold a candle to the intricate storytelling of Paul Thomas Anderson's "Inherent Vice". Of course, the film deserves to be judged on its own terms. But although Black's screenplay is an original, it feels so standard issue that it begs comparisons.

Still, there's some strong filmmaking on display here. The editing is brisk, maintaining the high energy of the characters and the plot. And much of that strong editing is in service of some brilliant visual humor, seamlessly connecting the outrageous comic set-pieces.

But most of all, the film feels like an audition for Ryan Gosling's heretofore underused skills as a comedic actor. And he absolutely nailed it. Rarely has he appeared so relaxed and effortless on screen, willing to be self-deprecating with both his voice and body. It's certainly a drastic change from the brooding "Only God Forgives" role which preceded his break from acting. Indeed, "The Nice Guys" may not be the most memorable neo-noir buddy comedy, but I'm sure we'll remember its stellar Ryan Gosling performance for some time to come.
Shane Slater at 7:51 PM 3 comments:

HIT ME WITH YOUR BEST SHOT: Trevor 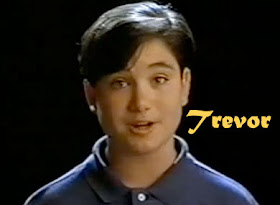 This week on Hit me with your best shot, we went for something small scale with the short film "Trevor". But this excellent Oscar winner was far from unsatisfying, presenting a wonderful story about a boy who struggles to fit in due to his sexual orientation and his endless love for Diana Ross. Indeed, he gets by literally on "Endless Love", his favorite Diana Ross song.

And it's his rendition of that hit tune that provided my pick for best shot below, a perfect example of the film's macabre sense of humor. As Trevor attempts suicide by popping pills, he makes sure to joyously sing along to "Endless Love" one last time. For a moment, it gives you hope that the power of the music will make him change his mind. And in a way, the film's happy ending does support the popular saying that a fabulous diva can truly "give you life". 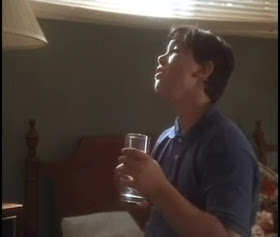 For as long as civilization has existed and into the foreseeable future, there will always be pressure on individuals to “fit in”. Particularly among younger generations, the expectations of “coolness” can be overwhelming. In her captivating debut feature "The Fits", Anna Rose Holmer explores this desire for belonging with a fresh, vibrant and triumphantly female perspective.