MOVIE OF THE WEEK: Valley of Love

There’s a scene early on in Guillaume Nicloux’s new drama "Valley of Love", where the cynical Gerard (played by Gérard Depardieu) dismisses his upcoming journey with the more optimistic Isabelle (Isabelle Huppert) as merely an elaborate, foolish ploy to reunite the pair and force them to mourn the son they lost. As he details the naive expectations of what’s to come, it’s as if Nicloux himself is making a statement that this won’t be your typical road trip movie. Unfortunately, the listless narrative that follows proves that sometimes a little cliché is needed to build a compelling story.

Read more at The Awards Circuit
Shane Slater at 11:45 AM 1 comment:

In our current moviegoing climate of remakes, reboots and sequels, not even the arthouse is immune to the nostalgia. Indeed, acclaimed French director Arnaud Desplechin proudly embraces both the regret and longing for days gone by with his latest film "My Golden Days". A loose sequel to his "My Sex Life… or How I Got into an Argument", this vibrant coming-of-ager beautifully captures the early years of Paul and Esther, the characters originated by Mathieu Amalric and Emmanuelle Devos respectively.

In anticipation of its North American theatrical release, I recently caught up with Desplechin to discuss the inspirations behind his decision to return to the story of these forlorn lovers. Below is an edited version of our conversation.

Read more at The Awards Circuit
Shane Slater at 10:29 AM No comments:

MOVIE OF THE WEEK: 10 Cloverfield Lane

This week's top pick is a veritable miracle in the world of commercial cinema. An unexpected sequel to 2008's brilliant found footage horror film "Cloverfield", Dan Trachtenberg "10 Cloverfield Lane" arrived in theaters this month with little more than a single trailer released a few weeks ago for promotion. And even more surprising than its mere existence, is the revelation that it turned out to be pretty darn great.

Set in an apocalyptic future, "10 Cloverfield Lane" details the nightmarish experience of a woman named Michelle (Mary Elizabeth Winstead). Her ordeal begins on a quiet drive through rural Louisiana, a road trip that soon turns catastrophic after another vehicle slams into hers. Some hours later, she wakes up in a mysterious room, chained to a wall. Reeling from the shock of her accident and present captivity, she becomes suspicious of a man named Howard (John Goodman), who informs her that he has placed her in his bunker for protection from the outside world. Also with them is Emmett (John Gallagher Jr.), who corrobates his theory that the world is under attack by extraterrestrial invaders who have poisoned the air. After much resistance, she settles into their makeshift home. But as she becomes more aware of her surroundings and starts putting the pieces together, Michelle starts to question whether Howard is really who he says he is, and whether she should risk an escape.

Though its title references "Cloverfield" and deals with similar themes of invasion and terror, the filmmakers have frequently stated that "10 Cloverfield Lane" is only a spiritual sequel. More important is the connotation of civility in the film's title, which immediately reminds you of a home address in a typical American suburb. And indeed, the film does take place largely in a domestic setting.

But despite the home-cooked meals and extensive movie collection, Trachtenberg replaces the white picket fence with impenetrable steel walls and an underlying tension that's far from familial. Though uninviting, the tense atmosphere entraps the viewer, as Trachtenberg's story keeps us in the dark as much as Michelle. Extending the film's pre-release mystery to the narrative itself, we're left guessing all the way through, guided by John Goodman's Howard as our possibly deranged man of the house.

Opposite him, Winstead's Michelle is no Stepford wife however. In 2016's first great performance, she captures both the fear and determined curiosity that comes from waking up in a world that has suddenly turned upside down. But Michelle goes further than that, posing a formidable challenge to the Ellen Ripley crown of cinema's great action heroines. Impressively resourceful and resilient, her fortitude and Winstead's own physicality is truly something to behold. She may not have a super power, but she relies on an innately human trait - the will to survive.

And it's this survivalist attitude that gives the film its pulse. Although the psycological battles waged between the central acting trio are intriguing, the plot does fall into some placid moments. But through his badass star, Trachtenberg is able to deliver a heart-pounding thrill ride that ultimately leads to a satisfying conclusion.
Shane Slater at 9:43 PM 4 comments:

Those who know me are aware that I watch a lot of television. And on the small screen, two of my favorite personalities are Keegan-Michael Key and Jordan Peele, the stars of the sketch comedy series "Key and Peele". I've been making my way through all the seasons of their show and they are absolutely two of the most talented comedians in the game. Which is why I'm excited for their upcoming film "Keanu". In it, the famously biracial actors will find themselves in unfamiliar territory as they try to find their beloved kitten (named Keanu), which may have been stolen by violent gang members. The trailer has been out for a while now and unsurprisingly, it makes me laugh every time. Check it out below:

HIT ME WITH YOUR BEST SHOT: Atonement 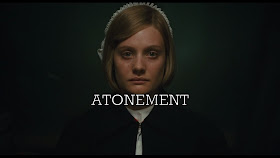 You know, sometimes you just wanna curl up in bed with a nice enjoyable film to cure your weekly case of "The Mondays". But no, Nathaniel insists on having us watch heartbreakers like "Bright Star" and "Atonement". Why does he hate me?

All jokes aside, Nat would surely agree that some of the most entertaining movies can also be very sad. And "Atonement" - the selected film for episode 2 of Hit me with your best shot Season 6 - certainly fits the bill. Several years and re-watches later, Joe Wright's sweeping wartime romance remains as beguiling as ever, with its lush audiovisual design and rich performances all carefully choreographed for maximum devastating impact (someone give this guy a musical!).

Indeed, while the film is breathtakingly beautiful, I always remember it primarily for its overwhelming sadness. As such, my choice for best shot this week eschews the more exciting visuals for something more mundane, but no less significant.

MOVIE OF THE WEEK: Eye in the Sky

Loathe as I am to quote gun fanatics, I couldn't help but think about their oft-quoted "guns don't kill people" rhetoric throughout the duration of Gavin Hood's new political thriller "Eye in the Sky". Indeed, despite all the high tech being employed in modern warfare as depicted in this film, the act of killing is ultimately a human decision. And like countless other anti-war films, its narrative weighs the cost of this decision against its perceived benefits. But whereas others often confront the moral issues from either the pre-combat stage of war or its aftermath, this deeply fascinating nailbiter puts us right in the immediate hot seat with the men and women tasked with pulling the trigger.

The premise of "Eye in the Sky" is fairly straightforward. In modern day Kenya, Colonel Katherine Powell (Helen Mirren) heads a covert operation to track down known terrorists working for the notorious Al Shabab organization. After years of meticulous intelligence work, Powell and her military team have finally cornered them in a Nairobi safehouse. Watching from afar, drone pilot Steve Watts (Aaron Paul) is locked and loaded, ready to engage. But a last minute development brings serious complications to the mission. The titular "eye in the sky" spots an innocent young girl within the target, providing a surefire risk of civilian casualty. Now, a pivotal question must be answered. Should they sacrifice this girl's life for the greater good?

And with that one question, the film takes this usual split-second decision and expands it to a far-reaching examination of wartime ethics and all the parties involved. In this scenario, the primary players are a network of American and British military/political personnel (anchored by Helen Mirren's sturdy performance as the level-headed brains of the operation). Though the film's war zone is Kenya, the main issue at hand concerns the policies of the Western world in the war against terror and perhaps more importantly, the influence of public perception.

Indeed, "Eye in the Sky" is all about optics, from the more literal visuals of drone espionage, to the all-important PID (Positive identification), to the more subjective nature of "good vs bad". The latter becomes the focal point of the narrative, leading to a almost comical series of bureaucratic "passing of the buck" that reaches near "Dr. Strangelove" levels of wartime farce. Throughout these proceedings, the film makes its most astute observation. That is, the brutal truth that the ultimate decision of whether or not to sacrifice a little girl has little to do with a sense of moral duty.

And yet, the film still goes to great lengths to convince the audience that a single civilian casualty would stall one of the most important terrorist takedowns in recent history. Imagine a version of "Zero Dark Thirty" where the climactic raid is halted for one person. Having seen my fair share of war documentaries (and of course, from everyday knowledge of our society), I remain skeptical. A fictional world indeed.

But once you suspend your disbelief, "Eye in the Sky" provides solid entertainment through and through. Granted, outside of clever aerial photography and a low-rumbling score that appropriately evokes a sandstorm on the horizon, the direction isn't especially stylish. But the film grips you in the sheer conviction of its message, as Hood provides an ingeniously effective exercise in tension-building, as well as a thought-provoking anti-war statement. Should they kill this little girl to prevent even greater mass murder? As this film proves, there's no right answer. Or at the very least, none that would help you sleep better at night.

Around the World with 50 Great Actresses

Despite what Hollywood may have you believe, actresses have been an integral part of the film industry since the earliest days of the medium. Indeed, many film lovers can trace their cinephilia back to the first time they saw actresses like Mary Pickford, Sophia Loren and Meryl Streep grace the screen. And today, that tradition continues, with actresses all across the world delivering scintillating performances in various languages. In the spirit of International Women’s Day and in celebration of their contribution, AwardsCircuit.com is therefore proud to shine a spotlight on 50 of these talented women who are currently leaving their mark on contemporary cinema, from Hollywood to Bollywood and beyond. Be sure to learn their names and seek out their fantastic work.