HIT ME WITH YOUR BEST SHOT: The Wizard Of Oz 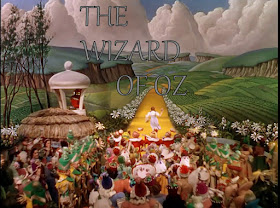 It's time for another season of Hit me with your best shot! Nathaniel starts us off with a bang, as we look at one of the greatest visual spectacles ever - "The Wizard of Oz". This foray into Dorothy's vivid imagination is filled with beautiful costumes, great art direction and cinematography that really makes the colors pop. When Dorothy opens that door to Oz, that burst of technicolor still takes my breath away on a repeat viewing.
Choosing a best shot for this film was surprisingly difficult for me however. In my opinion, the film is altogether gorgeous but there aren't really any powerful individual moments to capture. When I finally narrowed down my choices I selected an image that juxtaposes the prior cheeriness of the plot. 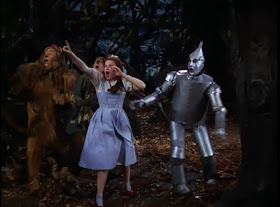 As I reaquainted myself with the world of Oz, the general loveliness of the film really jumped out at me. Even when we meet the wicked witch she doesn't seem all that diabolical by modern standards.
As Dorothy and her gang make their journey through Oz, the film maintains this general sweetness until this point towards the end of the film. The bright colors are gone and we enter this dark forest. It's legitimately creepy, especially when those winged monkeys appear! This shot also reminds of Judy Garland's perfect casting in this film. Her expressive face is easy to read and she definitely conveys the terror of the scene. You could easily pass off this image as something taken from a horror film.
Shane Slater at 6:48 AM