It's a wrap! The inevitable has happened, with "The King's Speech" being coronated as Best Picture(pictured above). The only major surprise was "Inception" winning for Best Cinematography. For some reason, the pundits thought Oscar voters cared that Roger Deakins was due for an Oscar (Cinematography). I should have stuck with my gut feeling and predicted Inception. In the end, I predicted 19 out of 24 categories. Not too shabby!

General thoughts on the ceremony (from the bits and pieces I was able to see during my loud Oscar party)
- Anne Hathaway and James Franco were surprisingly awkward together.
- When they played the actual "king's speech" during the Best Picture (along with the fact that it had already won Best Director) you knew it was gonna be "TKS"
- Loved the film clips throughout the show.
- Overall, the show was well produced and a good improvement on last year, but I felt it was still lacking a bit.

Once again, I salute the nominees for an enjoyable year at the cinema. 2011, the bar is raised!

The full rundown of winners...

It's finally Oscar time and it has been a really close race to the Kodak Theatre. It started with "The Social Network" looking like it was signed and sealed as the Best Picture winner, before the drastic u-turn (a sweep of the guild awards and the BAFTA) that puts "The King's Speech" as the frontrunner in the last stretch. These predictions are tough, as a lot of these categories are neck-and-neck. Here are my best guesses...

Now that the Oscars are less than a week away, I think it's a good time for me to list my favourites of the year and finally put 2010 to rest. As I posted in an earlier link, it really was a great year at the cinema. Here is my "Best of 2010", starting with my #1 pick - "The Social Network".

MOVIE OF THE WEEK: Fair Game

What a great film! It’s a shame they didn’t really campaign for the Oscars, as Sean Penn and Naomi Watts were really in top form. “Fair Game” gives you everything you want from a political drama, with strong performances and a smart, intriguing script. The film tells the story of how misguided intelligence about weapons of mass destruction lead to the unwarranted attack on Iraq. It’s really interesting to see how they throw Valerie and Joe Wilson under the bus when things got messy.
Shane Slater at 8:39 AM No comments:

MOVIE OF THE WEEK: The Color Purple

Pure excellence! This movie moved me like no other. I was balling my eyes out in the last scene (snotty nose and all!), even though it was the happiest part of the entire film! Steven Spielberg blew my mind with this one. I am astonished that this film was directed by a white man, as it so earnestly captured the plight of being black and a woman. Of course, he had a Pulitzer-prize winning novel to work from, but I can’t think of a single black director who could have done this film. Seriously, black directors and actors should study this film. Like “Precious”, this was devastating from the first scene, but in “The Color Purple” the drama never felt forced and it never strayed into melodrama (like all Tyler Perry films). I would have given this film every single Oscar it was nominated for (shockingly, it didn’t win any of them) as it was so perfectly crafted. The screenplay was amazing, with some lines stinging with such harsh truth. The acting was top notch, particularly Whoopie Goldberg, Oprah Winfrey and Maragaret Avery. There are so many scenes in this movie that can completely stand on their own. Easily makes my top 5 favourite films.
Shane Slater at 4:13 AM 13 comments: 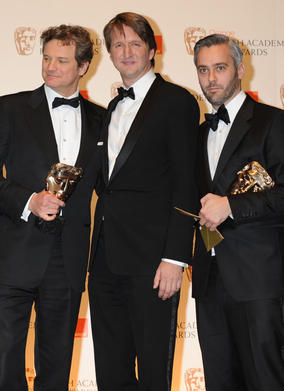 As expected, the Brits loved "The King's Speech", giving the film 7 awards (including Best Film and British Film in addition to 3 of the 4 acting categories!). Nice to see them recognize Fincher for "The Social Network". I fared better this year with my BAFTA predictions, getting 13 out of 21 correct. Here's the full list of winners:

We are on the home stretch now. This is the last big one before the Oscars. I expect "The King's Speech" to do very well here.

Where are the black people?

Kudos to A. R. Rahman for bringing some colour to the above photo from the recent Oscar nominees luncheon. While I was thoroughly pleased with the quality of cinema in 2010, I am slightly disappointed by the lack of black nominees for the Oscars. By now you would think that there would be a fair amount of black representation in the film industry? Wrong! This will be the most whitewashed Oscars since 2001. There are many reasons for the lack of black folk. Much of it is due to the lack of meaty roles for black people in good scripts. However, some of the blame has to go to the black filmmakers themselves. I watched "The Color Purple" last night and it really blew my mind that a white man could produce such an authentic, earnest "African-American drama. There is so much potential for black actors, but the directors and producers need to take more risks, rather than go for the easy factory-line cheap black comedies that we get so often. "For Colored Girls" had so much potential to be an Oscar candidate, but was ruined by Tyler Perry's adaptation of a strong play into just another overly melodramatic "Tyler Perry movie". However, there were a few noteworthy acting performances this year, who may have garnered Oscar nominations with a better publicity team (although I personally wouldn't substitute them for any of the nominees). These include:

MOVIE OF THE WEEK: L.A. Confidential 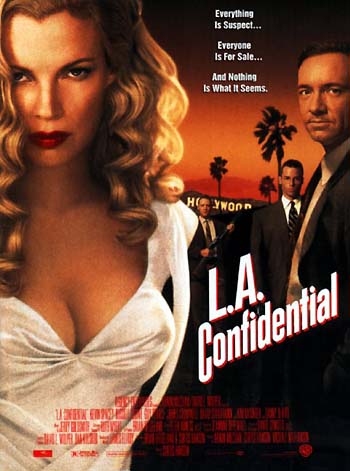 "L.A. Confidential" is a great film that requires a 2nd viewing to appreciate its brilliance. Knowing how it all unfolds in the end, you realize how really outstanding it is. It has such a rich script and an awesome cast. Not one to be missed.
Shane Slater at 4:23 AM No comments:

MOVIE OF THE WEEK: Empire of the Sun

"Empire of the Sun" is a solid effort by Steven Spielberg. While it's not his best work, it still brings much of the ambitious Spielberg style of filmmaking. It's always great to see today's A-list actors before they hit the big time, with Christian Bale playing an overzealous (almost too much) young British expatriate who is separated from his family at the beginning of World War II. I wouldn't call it a masterpiece, but it had good cinematography, good music and a good story.
Shane Slater at 3:05 AM No comments:
‹
›
Home
View web version